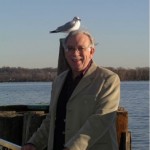 Born in Poland in 1935, Adam Peiperl survived the Holocaust in Nazi-occupied Poland at the age of 9 with his parents.  After moving to Paris, he graduated from high school there, and the family emigrated to the United States in 1953. Peiperl obtained a BS degree in chemistry from The George Washington University in 1957, and the following year married Martha Dorf, a chemistry graduate of American University.  Adam Peiperl was introduced to the color-generating properties of polarized light in a course that he took as part of his chemistry curriculum.  Intrigued by the possibility of applying this effect to kinetic sculpture, in 1968 he devised a system  in which the optically active plastic material he was using was placed in water, and the latter was agitated with a magnetic stirrer (a device familiar to him from the chemistry laboratory) in polarized light.  When in 1968 Peiperl showed the resulting artwork to the Corcoran Gallery of Art, it was immediately accepted in the “Light and Art” exhibition, which was in progress there.  He donated a prototype to the Smithsonian’s National Museum of History and Technology, and later received a patent on his art invention.
Tzveta Kassabova performing Naked Truth – image combined with Adam Peiperl’s Guardians: