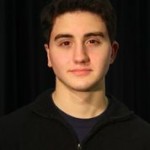 Ian Ceccarelli, born in New York City, at a young age showed his potential as a dancer. At the age of 5, he began his formal dance training at the Kennet School of Dance and Gymnastics in Goshen, NY where he danced in numerous recitals and yearly productions of The Nutcracker. Ian has studied with Mary Rotella as a part of The Masters School Dance Company, Ronnie Carney with New Jersey Performing Arts Center and Diane Madden of the Trisha Brown Dance Company. Currently, he is in his Senior Year at George Washington University. He has performed in Maida’s works Veiled Threat and Yesterday’s Garlands and Yesterday’s Kisses (2013), Collision Course – a.k.a. Pillow Talk (2012), and Trans Action (2014).  He has choreographed for the George Washington University’s Spring 2014 production of Danceworks.