John Moletress is a multi-disciplined artist who collides the 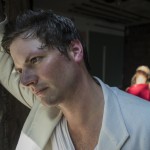 cerebral and the visceral in performance through collaborations with artists of mixed disciplines, cultural backgrounds and intentions of artistic expression. As the Founding Director of force/collision, a performance ensemble dedicated to collaboration and interdisciplinary work, he has performed work in such venues as the Kennedy Center, La MaMa ETC, Arena Stage, King’s College (UK), Homotopia! (UK) and Warehouse 9 (Denmark). He is currently performing in the mixed-media solo project, Jarman (all this maddening beauty), which will tour both nationally and internationally. Additionally, he is the 2014-2015 Visiting Lecturer at McDaniel College, an associate artist at Steel River Playhouse in southeastern Pennsylvania, an educator for the Kennedy Center/American College Theatre Festival and a member of the Society of Stage Directors and Choreographers. Previously, he was awarded the Helen Hayes Award for Outstanding Emerging Theatre for his co-founding of Factory 449.