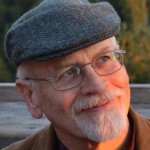 In poetry I’m about as focused on formal attentiveness and innovation as I am on discerning truth, thrilled when the sine-waves of these interests overlap and amplify into an audible freshness.  As a scholar and poet alert to the European and American avant-garde movements of the 19th and 20th centuries, and having Language Writing to work with and against as I matured, I find it natural to expect links between the arts, and feel it important to attend to the ways various artists influence one another.  I have a growing interest in the relationship between American literature and other English-language national literatures, including the work of those with multiple or complex linguistic, ethnic, racial, and national identities.

David McAleavey has published seven books, most recently HUGE HAIKU (Chax Press, 2005), ROCK TAUGHT (Broadkill River Press, 2016), and TALK MUSIC (Flying Islands Press, 2018), as well as one chapbook, DAVID McALEAVEY’S GREATEST HITS (Pudding House, 2001), and has edited two collections of writing from and about Washington area writers. He taught literature and creative writing at George Washington University from 1974 to 2020. He has lived in Arlington, Virginia, since 1976.