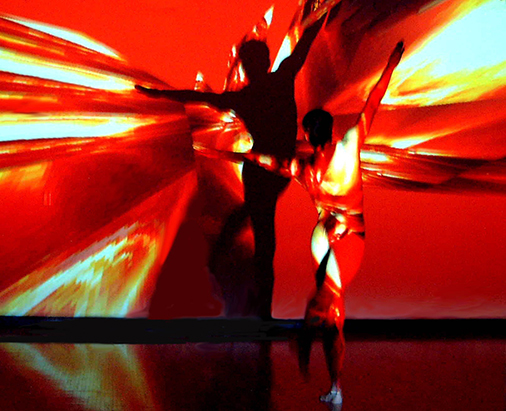 A public presentation of Dance of the Auroras – Fire in the Sky  was  sponsored by Smithsonian National Air and Space Museum in the large domed Albert Einstein Planetarium, Washington, DC the week prior to the premiere of the stage work in Lisner Auditorium.

The evening featured scientist presentations from NASA and other space agencies in Colorado and a performance by dancers with live interactive virtual worlds by Tania Fraga, Sao Paulo, Brazil. The event was sold out. It was a powerful moment for both the audience and the Dance Construction Company.

During the four years that Dance of the Auroras was being researched, Maida travelled and met with Auroral Scientists in Russia (All Sky Camera creators – the first), Norway, Sweden, Alaska, and, of course, at the NASA headquarters in Washington, DC.

Remember, at that time NASA was not displaying daily activity of the Sun online. NASA connected Maida to scientists and photographers from around the globe. She spent two weeks in Fairbanks Alaska collaborating with NASA scientists and faculty from the University. Each night she travelled to the observation station in the hopes the Aurora would be visible.