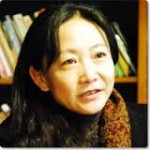 Wen Hui is one of the great modern dance choreographers in China. Originally a Chinese folk dancer in Yunnan, she attended the Department of Choreography of the Beijing Dance Academy from 1985 to 1989, and has since been a choreographer and dancer in the Oriental Song and Dance Ensemble of China (Dongfang gewutuan). In 1994, Wen Hui and the filmmaker Wu Wenguang co-founded China’s first independent dance theatre company, Living Dance Studio (Wudao shenghuo guangcuoshi).
The use of documentary film, dance theatre style, and creative sources and subject matters from Chinese daily life feature highly in most of Wen Hui’s works. Her first modern dance work, 100 Verbs (Yibai ge dongci, 1994) brings together dancers and non-dancers in a structured improvisational piece in which the main idea is to show human life as composed of different verbs. Toilet/Living Together (Tong ju shenghuo/Matong, 1995), performed by Wen Hui and Wu Wenguang, is a self-documenting dance relating Wen and Wu’s unmarried life. During the performance, they project pictures of their daily life in a documentary style. Report on Giving Birth (Shengyu baogao) premiered in 1999 at the Little Theatre of Beijing People’s Arts Theatre. The piece was a collective creation of Wen Hui and her dancers, and based on four years’ research—interviewing mothers, doctors, journalists, athletes and midwives about their opinions and experiences of giving birth. These interviews were documented and displayed during the performance. Dance with Farm Workers (He mingong tiaowu), which premiered in 2001 at the East Modern Art Centre, was performed by thirty construction workers and ten professional artists. Wen Hui’s basic idea for this piece was to present the bodies of rural workers as indispensable to Beijing’s development. They documented the entire process of the eight-day rehearsal, in which construction workers developed a way of expressing themselves by communicating with the artists. In her latest production, Report on the Body (Shenti baogao), which premiered in 2002 at Beijing Qiseguang Children’s Theatre, Wen Hui continues her documentary dance theatre style. By presenting a rural girl using her body as a means of survival, Wen Hui points out that a Chinese woman’s body remains a commodity, a victim of the consumer and male-dominated society.
In place of choreographed dance movements, Wen Hui is fond of improvisation based on the movements of people’s daily life, and she is highly interested in the movements that result from juxtaposing trained and untrained dancers. In addition to being a choreographer and dancer, Wen Hui also worked as an actor in File 0 (Lingdangan, 1994), one of the best-known works of avant-garde/experimental theatre, directed by Mou Sen. Although Wen Hui’s works are culturally rooted in China, the technique and spirit of Western modern dance has without a doubt deeply influenced her creations. She studied Western modern dance at the Limon Institute, the Erick Haukins School of Dance, the Trisha Brown Company Workshop, the Foikwang-Hochschüle Dance School and Pina Bausch’s dance company in 1994 and 1995. With the support of the Asian Cultural Council, she also studied aspects of modern dance in New York in 1997. Since 1995, Wen Hui and Wu Wenguang have been invited regularly to perform in the USA, UK, France, Holland, Belgium, Portugal, Korea, the Philippines and other countries. Other works of note include Breath with Earth (1996), Dining with 1997 (1996), Skirt (1996), Go Out and Come In (1997), Face (1997), Scene: Skirt, Video (1998), and Dining with 1999 (1999).
LIN WEI-YÜ