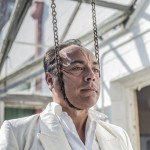 An interdisciplinary artist who is compelled by driving curiosity and imagination to create. His ongoing quest to fully explore and understand life has been expressed through his fingertips on computer keyboards, canvasses and clay, and also through the soles of his feet dancing on stages that traverse the globe. Gongora is a choreographer, performer, visual artist and educator, currently teaching at The University of the District of Columbia as an Associate Professor of Interdisciplinary Art in the school of Mass Media Visual & Performing Arts and also at the George Washington University Department of Theatre and Dance. He has received several awards for his choreography, which has been performed in venues such as Joyce SoHo, NYC; Dance Center of Columbia College, Chicago; St. Mark’s Church, DanspaceProject, NYC and The Museum of Contemporary Art, Chicago. Performance experience includes dancing with the companies of Troika Ranch (NYC), Mordine & Company Dance Theatre (Chicago), Maida Withers Dance Construction Company (DC), Jan Erkert & Dancers (Urbana) and Bob Eisen Dance (Chicago).